‘Bombshell’ tests our resolve for the truth

When patently unfair circumstances arise, many of us have a natural tendency to want to make them known, exposing the perpetrators for their misdeeds. But, when extenuating conditions – particularly those that could significantly impact us personally – intrude upon our willingness to step forward, we may find ourselves putting on the brakes when we don’t want to. Resolving such quandaries can often prove difficult, especially when we stand a lot to lose. So it is for a trio of dedicated, hard-working journalists who find themselves unduly imposed upon in the new fact-based drama, “Bombshell.”

Over the course of two decades, television executive Roger Ailes (John Lithgow) built the Fox News channel into cable TV’s most successful news outlet. By 2016, Ailes helped make it the most profitable property of its parent media organization, News Corp, much to the delight of the conglomerate’s CEO, Rupert Murdoch (Malcolm McDowell). And he did it by targeting a particular underserved audience – one closely resembling his own sensibilities – and getting the most out of his fanatically loyal (though some might say rigidly coerced) team of employees. Regardless of what one might have thought about the channel’s politics, policies, practices and pundits, Fox News was undoubtedly a success story – and an immense cash cow.

So what was that underserved audience that Ailes courted? It was the conservative right wing of the American political landscape, a constituency that was mostly White, male and “traditional” in its prevailing outlooks. Ailes skillfully amassed a staff of on-air talent and producers who knew how to appeal to that audience. And, to secure the loyalty of the network’s core viewers, Ailes assembled a team of beautiful, leggy female anchors and correspondents, a veritable palette of stunningly gorgeous, mostly blonde eye candy sure to appeal to those who liked a little voyeurism with their news. Critics of this approach to team building were quick to call it sexist, accusations that Ailes handily brushed aside by glibly observing that “television is a visual medium.” 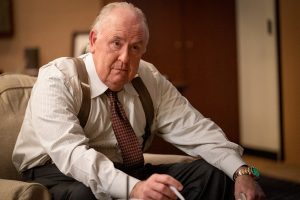 Regardless of Ailes’s tactics, one couldn’t deny his success. Some might even say that his tightly focused, specifically targeted plan for reaching his core audience was brilliant, effectively tapping into and capturing the attention of the viewership he was seeking to land. However, considering the specific practices Ailes used in achieving his goals – especially where recruiting on-air talent was concerned – any praise he might have received was instantly called into question. The reason: Ailes assembled much of his team through sexual innuendo and coercion, swapping career opportunities and promotions for “favors” characterized by leering looks, salacious comments and bald-faced propositions for acts of sexual submission. Despite his professed claims in support of journalistic integrity and broadcast professionalism, the cheesecake factor frequently figured into his plans. And, with the ever-looming threat of retaliation or dismissal for noncompliance or disloyalty hanging in the balance, those who didn’t bow to Roger’s wishes could face serious consequences if they didn’t play ball.

However, over time, word of Ailes’s sexual harassment began leaking throughout the organization. Previously silent employees began tentatively speaking to one another, comparing notes about their own experiences or sharing stories that they had heard about peers. This became obvious when certain developments emerged, such as undeniable demotions for those who failed to cooperate with Roger’s wishes, either in disagreements with his editorial viewpoints or rebuffs to his sexual advances. An organization long kept in line by its head’s unbridled manipulative practices was at last beginning to crack.

“Bombshell” tells this story through the personal experiences of three Fox staffers: Megyn Kelly (Charlize Theron), one of the channel’s biggest on-air assets, who had been harassed at one time but who was reluctant to step forward to publicly criticize her boss years after the fact, given the successful career she had built for herself; Gretchen Carlson (Nicole Kidman), a onetime Fox success story who had been systemically demoted for her “divergent” on-air views and her resistance to Ailes’s advances, some of which she secretly recorded without his knowledge; and Kayla Pospisil (Margot Robbie), a composite fictional character said to be based on several Fox employees whose enthusiasm to move up through the ranks soon brought her face to face with the way things really worked in Roger’s organization. Through their interwoven stories and the characters’ ongoing interactions with Ailes, viewers see how the organization’s dirty little secret mushroomed into a major scandal that brought swift action at Fox News and increased public attention to the issue of sexual harassment in the workplace. 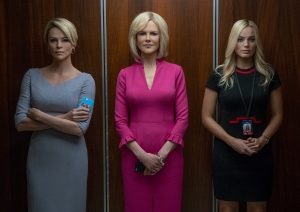 When faced with the kinds of difficulties present here, those affected faced some hard choices. Do they blow the whistle on someone who was using his power to try to control their destinies? Or do they keep quiet to preserve what they’ve attained? With so much on the line, the decisions they made invariably came down to what they believed was more important. And that, in turn, impacted what materialized in their lives, as beliefs are the cornerstone of the conscious creation process, the philosophy that maintains these intentions control what manifests in the world around us.

In making these decisions, the harassment victims needed to establish their priorities, a process that’s more difficult than one might think. Outsiders, for instance, might have easily said that no self-respecting individual should have to put up with the kind of abuse to which they were subjected. However, when faced with the loss of one’s livelihood, as well as the likelihood that one’s journalism career would be over (those who left Fox were seldom taken seriously as job candidates by other news organizations), victims had to think twice about making waves. This was especially true in light of “The Black Room,” a clandestine rogue operation run by Ailes to spy on journalists, including, allegedly, those who worked for Fox who were suspected of the kind of disloyalty the big boss so detested.

Thus, with all of this pressure in place, speaking up was risky business. Even if someone worked up the gumption to take on the organization, Ailes made it difficult to challenge the machine by structuring employment contracts with clauses requiring grievances against Fox to be settled through arbitration, not litigation. The only way to get at him was to sue him personally, a steep hill to climb without proof. Fortunately, though, one victim thought ahead when it came to that front, compiling the evidence to make such a lawsuit possible. 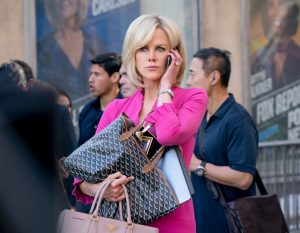 This innovative strategy illustrates that, in the end, nothing is impossible without a little ingenuity, an outcome made possible by using conscious creation to break through perceived limitations. By coming up with beliefs to establish inventive approaches to seemingly insurmountable problems, we can indeed overcome even the most formidable obstacles – even the kind erected by Roger Ailes himself.

In addition to matters of personal well-being, the priority sorting process involved other less tangible (but nonetheless significant) considerations. As noted previously, Ailes demanded loyalty from his employees, and, for those who gave it, he rewarded them handsomely. In many cases, this led to the development of a strong sense of allegiance, often despite his transgressions. Some Fox staffers found it difficult to abandon such attitudes, afraid that their actions would constitute personal betrayals that they were unwilling to make. This became especially apparent when allegations against Ailes began circulating widely, prompting his most devoted in-house supporters to come up with a “Team Roger” campaign in which they staunchly urged co-workers to wear tee shirts bearing that slogan.

However, as the degree of accusations exploded, these newly developing circumstances made it increasingly difficult for even the most dedicated employees to stay silent. As time passed, prevailing conditions made it easy to alter the underlying beliefs behind these positions. Again, conscious creation finds a way when there’s a will to drive it. 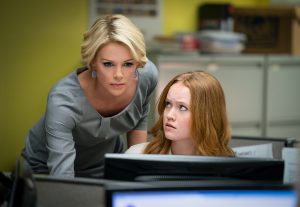 Of course, not everyone’s view is capable of being easily changed. As the film illustrates, Roger’s wife, Beth (Connie Britton), and his lawyer, Susan Estrich (Allison Janney), are reluctant to agree with the charges leveled against him. Beth, in fact, tries to brush them off by suggesting that her husband’s lewd comments are nothing more than a reflection of his “salty” sense of humor. Such blind obedience, both on her part and even that of some Fox staffers, illustrates how stubbornly persistent beliefs can be, something that can prove devastatingly disillusioning in the long run.

What’s most inspiring in this story, though, is the willingness of the victims to ultimately step forward. They may have operated largely independent of one another, but their collective, co-created effort had a tremendous cumulative impact. Their efforts effectively challenged the position of someone who thought he was untouchable. They collectively helped foster change within an organization where sexual harassment was not accorded the seriousness it deserved (especially since it eventually reared its ugly head with individuals other than just Ailes). And they helped bring new awareness to the problem in workplace culture throughout America, not just within the ranks of Fox News.

The outcomes obtained by these courageous individuals reflect their resolve to live out their value fulfillment, the conscious creation concept associated with being our best, truest selves for the betterment of ourselves and those around us. Despite the difficulties they may have experienced along the way, the efforts they expended to achieve change were worth it in the end. It was their destiny to do what they did, and, fortunately, they formulated and implemented the beliefs they needed both individually and collectively to achieve the results they sought. Talk about fair and balanced. 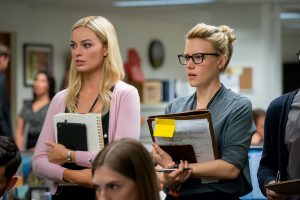 Reviews of this explosive exposé have run the gamut from highly praiseworthy for taking on such a sensitive subject to utterly disappointing that it doesn’t “do more” in exploring the roots of its underlying issue. This is a conundrum I find hard to fathom. Frankly, I don’t understand what disappointed viewers expected out of this release, but I find their criticisms misplaced. The picture tells a specific story; it’s not an overview treatise on the subject matter. Thus the suggestion that “Bombshell” should have somehow addressed this material in a way that it wasn’t intended to be handled in the first place is an unfair disparagement – and one this film doesn’t deserve.

For the most part, I found director Jay Roach’s latest to be a worthwhile offering, serving up a probing look at a troubling story that effectively mixes cynicism, satire and serious drama in examining a troubling workplace issue. The film’s superb ensemble cast features excellent performances across the board from Theron, Kidman, Robbie, Lithgow, Janney and McDowell, and its inventive storytelling approaches – though at times a little gimmicky – generally keep the picture fresh and engaging throughout.

“Bombshell” has been lavishly honored with awards season nominations, especially in the acting categories. For her efforts, Theron has earned Golden Globe, Screen Actors Guild and Critics Choice Award nominations in the lead actress categories, while Robbie has received comparable honors in the supporting categories. Kidman, meanwhile, has picked up a supporting actress nod of her own in the SAG Award competition. In addition, the film’s ensemble has received nominations in the SAG and Critics Choice Award contests, as well as a CCA nod for best hair and makeup. 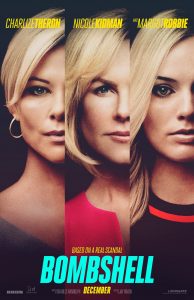 In this day and age, it’s hard to believe that victims still have to contend with an issue like this. Cases have been successfully brought against offenders for decades, so it’s not like the consequences of these actions are unknown or anything new. And yet there are still culprits out there who believe they can get away with such actions. Fortunately, there are courageous souls out there who are willing to step up and challenge the guilty parties – and, thankfully, their fearless, intrepid efforts can prove to be powerful bombshells in themselves.