It’s amazing how someone can embody both the best and worst of what we’re capable of. These qualities, polar opposites to be sure, seem incompatible with one another, yet, on occasion, they sometimes wind up residing within a single individual. Learning how to reconcile these extremes can thus prove to be quite a challenge for those of us who want to do our best but find that there are times when it’s difficult to control ourselves. Such is the experience of a legendary musician as seen in the enthralling new documentary, “David Crosby: Remember My Name.”

Singer-songwriter David Crosby has led quite a storied life. Over his decades-long career, he’s been both a golden boy and a bad boy of the music business. And now, after years of living large, partying hard and burning more than his share of bridges, he’s come into the home stretch of his life with many accolades and numerous regrets.

So how does one deal with such a curious mixture of high praise and heavy baggage? That’s what the 76-year-old musician is attempting to do these days. There’s a sense of quiet urgency associated with this, too, given Crosby’s failing health. Having experienced several heart attacks, the implantation of eight cardiac stents, a liver transplant and the onset of diabetes, he realizes he could depart this world at any time. Which is why he’s trying to make sense of his life (and himself) with what time he has left. 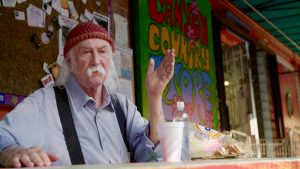 Legendary singer-songwriter David Crosby pays a visit to Laurel Canyon, his old stomping grounds and home to many up-and-coming musicians during the 1960s, as seen in the revelatory new documentary, “David Crosby: Remember My Name.” Photo by Edd Lukas and Ian Coad, courtesy of Sony Pictures Classics.

“David Crosby: Remember My Name” is more than just a nostalgic stroll down memory lane. To be sure, the film does cover the many diverse aspects of his career, including his often-stormy stint with the 1960s rock band the Byrds, his phenomenally successful collaborations with Stephen Stills, Graham Nash and Neil Young, and his legendary appearance at the Woodstock Music Festival. It also explores his professional and personal relationships with other high-profile musicians of the ʼ60s and ʼ70s, such as Jerry Garcia, Bob Dylan, Joni Mitchell, Cass Elliott and Jimi Hendrix. And it looks at his many romances, including those with Mitchell, with longtime girlfriend Christine Hinton (who was tragically killed in a traffic accident) and with his current wife, Jan.

But, despite his many successes, Crosby has also had his share of downfalls. In addition to his health problems and his long-lasting despair over Christine’s death, he has undergone serious bouts of addiction and prison time. He got himself fired from the Byrds for his unpredictable, unreliable and irresponsible antics, a number of them occurring while on stage and involving highly inflammatory political messages at the height of the social turbulence of the 1960s. And then there were his very public disputes with former collaborators like Byrds founder Roger McGuinn and all of his CSNY bandmates.

But, then again, Crosby has achieved accomplishments few others have attained. He’s been inducted into the Rock ʼn Roll Hall of Fame twice, first as a member of the Byrds in 1991 and then as a member of Crosby, Stills and Nash in 1997. And then, at age 72, when many of us begin kicking back and settling down, he launched head first into a prolific creative resurgence, producing four solo albums over four years, with more apparently to come. 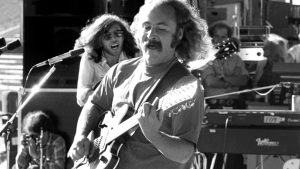 To many of us, such extreme contrasts probably seem incongruous. By Crosby’s own admission, they even seem that way to him. He’s not even sure how he’s managed to live as long as he has, given the passings of so many of his contemporaries, including some who lived less recklessly than he has. However, he’s made every attempt to be honest with himself about his behavior, acknowledging his shortcomings and realizing that his failings are of his own making and no one else. While he hopes that reconciliations with his former collaborators might be possible – an accomplishment he’s been able to achieve with most of his family members – he’s also cognizant enough to realize that such reunions are unlikely and that he’s the cause for that. In light of that, he accepts his feelings and responsibilities, hoping for redemption but nevertheless moving on, continuing to concentrate on what he does best – making music.

For better or worse, creative expression is something that often requires acquiring a range of experiences, both positive and negative. Were it not for that, artists might well not be able to produce their best work. While that certainly involves the heights of elation, it may also call for firsthand knowledge of painful despair, something most of us would rather eschew but that may be unavoidably integral to the successful unleashing of our inner muse.

That may help to account for Crosby’s experience. For what it’s worth, having gone through such ups and downs could help to explain his creative success, experiences made possible by the conscious creation process, the philosophy that maintains we manifest the reality we experience through the power of our thoughts, beliefs and intents. Although he lived through the free-thinking times of the 1960s counterculture, an era in which such alternative notions emerged from obscurity and gained a firm foothold in the culture, it’s unclear whether he became aware of or availed himself of this philosophical outlook. But, even if not, much of his life experience reflects many of the principles underlying this metaphysical mindset. 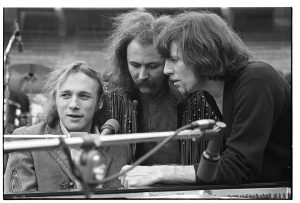 When looking at Crosby’s creative output in conjunction with the events of his life, one can see parallels between his personal experience and his artistic expressions. The “inspiration” provided by such incidents helped make that possible, both positively and negatively and in both his individual and collaborative efforts. Would that have happened if he had not drawn those experiences into his existence? That’s hard to say with certainty, but we have seen it with an array of other artists (including in a number of recent films) involving everyone from painters to musicians to actors. By having something to draw upon, these creatives have tapped into source material that helped them manifest their works, developments that might not have otherwise happened.

That’s important, too, for it’s crucial to one’s value fulfillment, the conscious creation principle that maintains we should strive to become our best, truest selves for the betterment of ourselves and those around us. Music has been Crosby’s destiny ever since he learned to sing and play the guitar, and, fortunately for him (and us), he was perceptive enough to recognize this ability and to make the most of it. His inventive melodies, blissful harmonies and thoughtful lyrics have given us much to savor, creations that have truly made the world a better place for him having been a part of it. One need only look, for example, at his involvement with the stirring protest song “Ohio,” a composition written by CSNY collaborator Neil Young in response to the 1970 Kent State University shootings, to see the impact his contributions have made on the national culture and psyche. His art helped unite us at a time when we needed it, leaving a legacy that has lasted ever since.

With that kind of impact, it’s easy to see how one’s influence on the culture can extend far and wide. The often-outspoken Crosby, for instance, helped shape the social and cultural landscape of the 1960s. He even unwittingly left an imprint on the art and politics of the time, as seen in a post-Woodstock appearance on The Dick Cavett Show in which he made his views as plain as day, helping bring radical new ideas to the mainstream. He even had impact on fashion and style, as evidenced by the looks, mannerisms and attitudes exhibited by the character played by Dennis Hopper in the radical cinematic epic “Easy Rider” (1969). When one can wield that kind of wide-ranging influence, it’s possible to reshape the world, even in matters of critical importance and individual style. 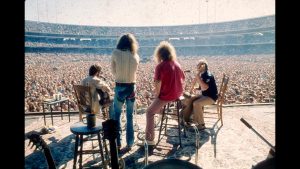 On stage at the peak of their career (from left) Neil Young, Graham Nash, David Crosby and Stephen Stills (CSNY) appear before a packed stadium audience as seen in the candid new documentary, “David Crosby: Remember My Name.” Photo by Joel Bernstein, courtesy of Sony Pictures Classics.

Crosby didn’t remain static throughout all this, either. He constantly evolved and changed, an expression of the conscious creation concept that we’re all in a constant state of becoming. This is reflected in his diverse musical repertoire, as well as his other artistic ventures, including occasional forays into acting and “modeling” for rock photographer Henry Diltz. It’s also apparent in the various roles he’s played in his vocation, having been everything from a peer collaborator to a solo act to a mentor for a new generation of musicians. That’s quite a range for multiple lifetimes, let alone one.

Given where Crosby is now, however, he’s most focused on certain goals, using his creative powers to fulfill as many of them as he can with the time he has left. Most of them center on the concept of redemption, both personally and artistically. It’s commendable that he recognizes this, too, for it’s a healthy approach to try to rectify our missteps. All too often we feel reconciled to our failures, convinced we’ll never be able to redeem ourselves. But, as the saying goes, nobody’s perfect, and we all make mistakes in the course of our individual journeys.

Oftentimes these missteps involve valuable life lessons that don’t always go perfectly on our initial attempts. But we don’t get only one attempt; we can always start anew if we allow ourselves to do so. Conscious creation makes it possible to try again, invoking different beliefs and trying different approaches, new and improved initiatives that, one can hope, will work. That certainly seems to be what Crosby is doing now. Let’s wish him the best. 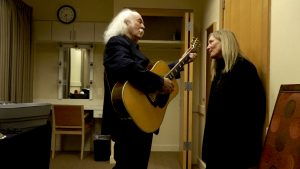 Hands down, this is one of the best music/celebrity biographical documentaries I have ever seen. In many ways it’s a personal confession, providing an unflinchingly candid look at someone who wants to bare his soul, make reparations for whatever he can and leave the world with as much of his gift as he’s able to create. Through uncensored interviews with the artist and those who know him, as well as a wealth of archive photos and footage, viewers are treated to an honest, introspective look at one of the most influential musicians of the ʼ60s and ʼ70s. Director A.J. Eaton and executive producer Cameron Crowe have put together one helluva picture here, a Grand Jury Prize nominee in the documentary category at the Sundance Film Festival. Don’t miss this one.

Time passes us by quickly with no regard for how we feel about that. As a consequence, it’s up to each of us to manage this resource as best we can, making the most of it and certainly not squandering it. But, should we screw up, all is not lost; we always have a chance to make up for our errors, even when the clock is running out. The key, though, is taking charge of our efforts and invoking beliefs that will bring about what we hope to achieve while we have time left. David Crosby provides us with an excellent example of how to go about this, showing that it’s never too late to make amends – or a little music. 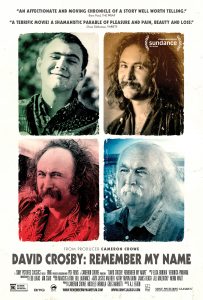