Skip to content
Home/Conscious Creation, Drama, Movie Reviews/‘Becoming Astrid’ explores how we become who we are

‘Becoming Astrid’ explores how we become who we are

As we grow up, we lay the foundations for our lives and for who we end up becoming. Some of us may feel that this results from a series of happenstance events, random occurrences that seemingly materialize with no rhyme nor reason. Yet, if we look closely enough, there’s a certain order to things, with elements that unfold from identifiable aspects of our upbringing, many of which, in hindsight, often appear purposeful, as if they arise from defined, deliberate underlying influences and initiatives. Thus, when we examine our lives from that perspective, it’s quite possible to clearly see how we become who we are. Such is the case with the film chronicle of the formative years of a beloved children’s author, “Becoming Astrid” (“Unga Astrid”), available on DVD and video on demand.

Astrid Lindgren (née Ericsson) (Alba August) enjoyed living her life as a free-spirited adolescent in rural Sweden in the 1920s, despite a pervasively conservative upbringing. Her willingness to quietly but forthrightly question authority often ran afoul of the strict, religious-based rearing of her parents, most notably her mother, Hanna (Maria Bonnevie). However, even under such stern conditions, Astrid steadily began to assert herself, a quality recognized (and discreetly applauded) by her father, Samuel (Magnus Krepper), who wanted to see his daughter develop the life skills that would enable her to become self-sufficient and successful. So, when he learned about an internship opening at the local newspaper, given Astrid’s budding talent for writing, he encouraged her to pursue it.

When Astrid inquired about with position with the editor, Reinhold Blomberg (Henrik Rafaelsen), a strong rapport developed between them almost immediately. Blomberg was impressed with Astrid’s prose and her ability to efficiently organize the operations of the newspaper office. He was also smitten with her youthful beauty, something that helped take his mind off the contentious divorce he was going through with his wife, Olivia (Maria Alm Norell). Blomberg’s infatuation with his new intern soon led to an affair – and to Astrid’s unplanned pregnancy. 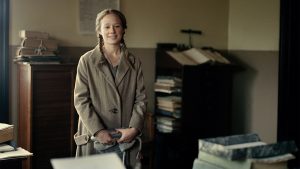 A teenage Astrid Lindgren (née Ericsson) (August Alba) launches what would become a successful writing career by working as an intern at a small town newspaper in rural Sweden in the engaging biopic, “Becoming Astrid” (“Unga Astrid”), available on DVD and video on demand. Photo courtesy of Music Box Films.

In light of the social values of the time, Astrid couldn’t stay in her hometown of Vimmerby. She relocated to Stockholm, where she enrolled in a secretarial training course and took a job to support herself while her pregnancy ran its course. When it was time to give birth, she traveled to Copenhagen, Denmark to have her baby in seclusion, a precaution designed to keep the unwed mother out of the public eye of her homeland. She soon became mother to a newborn boy, Lars, whom she called Lasse (Marius Damslev), leaving the infant in the care of a foster parent, Marie (Trine Dyrholm), until conditions were more conducive to bring her child back home to Sweden.

However, despite her efforts to manage these matters as delicately and pragmatically as possible, Astrid experienced some obstacles. Blomberg, who had promised to marry Astrid once his divorce was final, ran into delays in the proceedings when charges of infidelity were entered in the case, a crime that could land him in jail if found guilty. But, when his sentence of only a fine was handed down, Astrid felt as if she had been strung along in anticipation of a far worse fate, a revelation that led to mistrust and prompted her to decline his proposal. She now faced the prospect of having to bring up Lasse on her own, not an easy option given her personal and economic resources. This was made all the more difficult with no support from either Blomberg or her family, from whom she had become estranged because of her status as a single mother, a shameful taboo at the time.

To help make it possible for Astrid to bring Lasse back to Sweden, she landed a better-paying job with the Royal Automobile Club working as an assistant to a no-nonsense but quietly compassionate boss, Sture Lindgren (Björn Gustafsson). Eventually she had saved enough to claim custody of her son, but she ran into a complication – now that Lasse was a toddler and had been under his foster mother’s care for so long, he had bonded with her, recognizing Marie, not Astrid, as his mother. 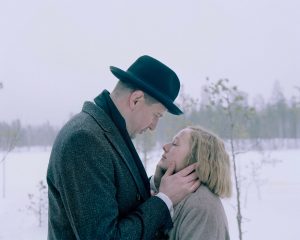 Needless to say, Astrid was devastated. She saw how attached Lasse had become to Marie and couldn’t bring herself to separate them, opting to leave him in her care permanently. But, when Marie fell ill and her health would no longer allow her to care for her fosterchild, there was no choice but for Astrid to take custody of her son. That proved difficult, given Lasse’s resistance to accepting his “new” mom.

What was Astrid to do? That’s the challenge she faced as a single parent with no financial support other than what she earned from her job and saddled with responsibility for a child who fought to accept her. And, when Lasse contracted a severe case of whooping cough, the challenge grew even greater. But there were solutions to be had, such as those afforded by the unexpected generosity of others. And, given her way with words, a new skill emerged that opened up more doors than she could have ever possibly imagined, opportunities that would be available to her for the rest of her life.

This film, as its title suggests, thus illustrates how Astrid grew into the person she would become, someone who squarely faced her challenges and determined how to overcome them. The sense of personal empowerment that she developed through these experiences would not only distinguish who she was, but would also go on to define the nature of the characters in her writings, most notably those in the Pippi Longstocking books. She confronted her fears and soldiered on, learning the value of what can come from believing in oneself. But that should come as no surprise to anyone who successfully taps into the power of the conscious creation process, the philosophy that maintains we manifest the reality we experience through our thoughts, beliefs and intents – especially those related to our beliefs in ourselves.

Admittedly, Astrid went through something of a learning curve when it came to these matters. When she initially set off for Stockholm, for example, she was unsure that she could rise to the occasion. However, somewhere deep inside herself, she must have known that she could do it, even if unaware of that fact. Thankfully, she came to recognize this for herself, aided by a little reassurance from her father, a realization that emboldened her to fulfill the tasks at hand. 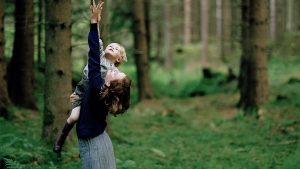 In tackling such challenges, Astrid learned how to become quite the problem-solver. She didn’t hesitate to think outside the box, pushing through established limitations that led her to the resources that fulfilled her needs. By giving herself permission to embrace beliefs that left her open to a wider range of possibilities, she thus had access to a greater array of potential solutions, including those that she might have otherwise overlooked.

So where did such an open-minded outlook come from? One need only look to Astrid’s upbringing; even though she was raised under conventional circumstances, she didn’t hesitate to question authority if it didn’t make sense or satisfy her curiosity, no matter how impudent her mother found such thinking and behavior. And, even though it may have caused Astrid some consternation at the time, it infused her with a resolve that would effectively help her to address – and overcome – the challenges she faced later on in life.

Some might see such actions and intents as impulsive, perhaps even weird, implausible or “wrong,” given that they fly in the face of convention. Yet Astrid acted on them anyway, even when potential pitfalls loomed. However, as she came to find out, they ultimately ended up serving her well. By acting upon these intuitive beliefs, she learned the value of paying attention to them, recognizing that one never knows what beneficially fortuitous opportunities they may lead to.

Adopting such a mindset also enables us to sharpen our capabilities for spotting synchronicities, those seemingly meaningful coincidences that often lead us to the connections, resources and circumstances that provide us with exactly what we need. In Astrid’s case, she may not have always been able to see what would arise from her thoughts, beliefs, intents and actions, but they always seemed to work out, presenting her with a long, satisfying and successful life, one that provided both her and her huge following with fulfillment, inspiration and personal empowerment. 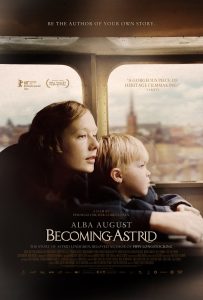 “Becoming Astrid” tells the heart-tugging yet uplifting tale of a beloved talent, showing how her experiences shaped her life and the works it inspired. Beautifully filmed and well acted, the picture captures the look and feel of the period, as well as the persona of its protagonist. However, despite its many assets, director Pernille Fischer Christensen’s latest definitely would have benefitted from more detail about the nature of Lindgren’s writings, as those who are unfamiliar with her works may not readily grasp the relevance between her life and her books. That deficiency, unfortunately, makes the film feel somewhat less than complete. However, there is much to like here, especially for those looking for the kind of movie that, like Lindgren’s books, is easy to cuddle up with on a long, rainy Saturday afternoon.

It’s been said that the apple doesn’t fall far from the tree. And, as stories like this show, it’s also apparent that the tree is a direct outgrowth of its roots. That analogy certainly applies to us both literally and figuratively, and it’s fascinating to see what results, especially when what lies underground is robust and thriving. One could say that Astrid Lindgren had fertile ground to draw from, and we should all be thankful for the bountiful harvest it produced.