When the chips are down, it’s comforting to know that there are those who have your back. That’s especially true for the residents of countries that have social services systems in place to provide needed support in times of crisis, like unemployment and health emergencies. It’s truly reassuring that those structures will be there when they’re needed. But will they? Do the agencies responsible for administering these services live up to their obligations? And what happens if someone in need fails to properly comply with bureaucratic dictates by not dotting an “i” or crossing a “t”? Those are the maddening frustrations explored in the moving new British drama, “I, Daniel Blake.”

When 59-year-old Newcastle construction worker Daniel Blake (Dave Johns) suffers a heart attack on the job, he’s laid up while he recovers. He subsequently undergoes cardiac rehab and manages to bounce back relatively well, seemingly fit to return to work. But, when his medical evaluators fail to clear him for employment, he’s unable to go back to his job. At the same time, though, because of his improved health, he’s deemed ineligible to receive government-sponsored compensation to support him through the remainder of his recovery. Caught between these conflicting assessments, and with no spouse or family to back him up, Daniel is thus left without a source of income. He then attempts to sort matters out, but that proves to be a much more difficult task than expected when dealing with an oblivious, uncaring, inept, inflexible bureaucracy.

While appealing his case at a local job assistance center, Daniel befriends a distressed young single mother, Katie Morgan (Hayley Squires), and her two children, Daisy (Brianna Shann) and Dylan (Dylan McKiernan), who run into comparable issues in dealing with the system. He helps Katie get back on her feet, and she returns the favor when she’s able. More than anything, though, they provide one another with much-needed support when facing down a common foe – one that shouldn’t even be a foe in the first place.

As Daniel, Katie and the children attempt to navigate their way through a system that’s anything but user friendly, they come to see the reality of an establishment that’s fundamentally more intent upon discouraging constituents from seeking assistance than actually providing them with the benefits to which they’re entitled as taxpayers. This is perhaps best illustrated by the formal reprimand given to a concerned case worker (Kate Rutter) after she attempts to assist Daniel in deciphering the confounding requirements with which he’s expected to comply. It’s also apparent through the bureaucracy’s cold, unfeeling reliance on Internet-based procedures and protocols, tasks that applicants are expected to become proficient at – skills that are unlikely to be on the radar of someone like a 59-year-old laborer whose working life has never brought him into contact with a computer. 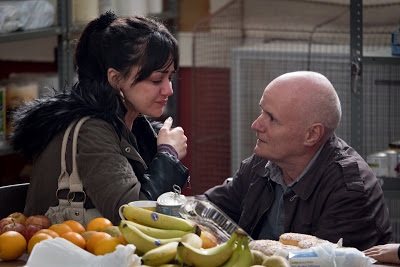 Frustrated by the bureaucracy of the social services system, construction worker Daniel Blake (Dave Johns, right) and single mother Katie Morgan (Hayley Squires, left) seek to support one another through their hardships in the new British drama, “I, Daniel Blake.” Photo by Joss Barratt, courtesy of Sundance Selects.

Despite the lack of compassion in officialdom, however, there are those in society who indeed feel for those who are down on their luck, as Daniel and Katie discover when they avail themselves of the generosity offered by charitable organizations. Those groups know what people need and rise to the occasion accordingly. They set an example their government peers should follow.

As their respective odysseys play out, Daniel and Katie continue to seek solutions to their problems, both through official channels and otherwise. But will they succeed in their efforts? That depends on what they do – and who’s willing to listen.

It’s both frustrating and heartbreaking to witness what the protagonists experience, especially knowing that their stories are based on the real-life stories of others similarly situated. It all seems so patently unfair, perhaps even prompting some viewers to want to jump into the screen to help out. But, alas, the characters are left to sort out their issues for themselves.

However, when watching what Daniel and Katie go through, some viewers – including those who feel for their circumstances – might wonder how these characters got themselves into the situations they now face. That’s not necessarily meant to be cynical or cold-hearted, either; it could be simply chalked up to mere curiosity.

In cases like this, that’s where an understanding of the conscious creation process – the means by which we manifest the reality we experience through the power of our thoughts, beliefs and intents – could help. But why on earth, one might ask, would they purposely create hardships like those they’re going through? 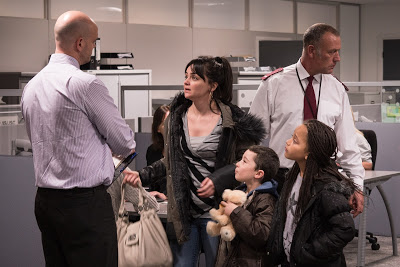 As in any conscious creation scenario, what we ultimately materialize depends on the thoughts, beliefs and intents we maintain, the reasons behind which may only be known and understood by those putting them forth (and, in some cases, not even then, at least consciously). In many instances, our experiences may be tied to learning particular life lessons, for better or worse, good cases for which could clearly be made for both of these characters. In other cases, we may choose to experience certain difficulties to help draw attention to them, a means of garnering support for solutions to them so that we can eliminate them, both for ourselves and our progeny.

At first glance, some might look upon such explanations as wholly implausible: Why would anyone want to purposely undergo such hardships, especially to make a point? That’s certainly a credible argument, too. However, sometimes drastic circumstances call for drastic measures, and those who step up to the plate to make others aware of these situations are to be commended for their courage. Were it not for them and their experiences, we might not otherwise be motivated to take action to overcome these difficulties. Admittedly, this may not be the easiest or most ideal way to draw attention and resolve such matters, but sometimes we need to be hit over the head to take notice of what’s going on – and what can be done to devise and implement workable solutions so that no one has to go through them again.

These scenarios could also be employed for other purposes as well, such as engendering heightened levels of compassion. As the bureaucrats routinely demonstrate, this is a quality very much in need of cultivation, especially when those who exhibit it are unfairly called on the carpet for doing so.

Circumstances such as these also encourage us to push the levels of our creativity, both in getting through the day-to-day challenges of these hardships and in coming up with solutions that, one would hope, prevent individuals from being thrust into conditions like this in the first place. Of course, that calls for a willingness to open up our ability to envision alternatives to conventional thinking and established measures, something that the more enlightened among us might be encouraged to do but that would clearly prove difficult for those whose noses are stuck in an inflexible rulebook.

Even if none of foregoing accurately reflects the characters’ real reasons for manifesting what they have, these ideas may nevertheless provide us all with significant insight into these issues. Any efforts we make to address them might help ease the pain of those suffering through these challenges, even if they don’t exactly match the specific reasons behind the realization of their hardships. And, for those going through their share of difficulty, every measure of assistance can help, no matter how great or small. 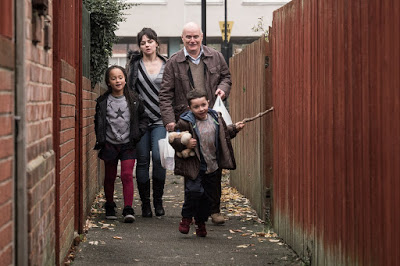 Populist filmmaker Ken Loach serves up one of his best offerings in “I, Daniel Blake.” Despite a slight tendency to meander at times, the film nevertheless poignantly shows the myriad hardships that individuals like Daniel and Katie must endure when faced with the kinds of circumstances they’re saddled with. The fine performances of Johns and Squires, as well as Paul Laverty’s excellent script, bring these conditions down to a truly human level, showing us what our less fortunate peers need and, one would hope, inspiring us to call for fixes to a system sorely in need of repair.

Although the film is just now making its way to North America, it’s been widely screened in Europe and has been richly rewarded in overseas awards competitions. The picture was named best British film in the BAFTA Awards, the UK’s equivalent of the Oscars, a competition in which it also received nominations for best film, director, screenplay and supporting actress (Squires). In addition, the picture captured three awards at the 2016 Cannes Film Festival, including the Palme d’Or, the Festival’s highest honor.

“I, Daniel Blake” isn’t always the easiest film to watch, but it effectively tugs at the heart strings and even rouses a certain degree of justifiable ire. It also demonstrates what it means to be truly compassionate in the face of adversity, be it through the efforts of collective or individual efforts. Those in government who willfully bury their heads in their regulations can learn a lot from this film – provided they take the time to lift their heads out of their paperwork in the first place. Let’s hope they do.