Even under the best of circumstances, getting a romance to turn out as hoped for can be a tricky proposition. But, when a clear, heartfelt path to happiness is revealed to us, we’d be foolish to ignore it, no matter how unconventional it might seem, what our past tells us or what others may think. Such is the challenge put to the lovelorn protagonists of the delightful new romantic comedy, “Enough Said.”

Life’s transitional periods can be challenging – and full of surprises. Just ask Eva (Julia Louis-Dreyfus). The divorced, forty-something masseuse diligently strives to build her client base, and she sincerely loves her craft (even if she isn’t crazy about some of her regulars or their annoying quirks). To seek solace from her career challenges, she immerses herself in her role as the doting mother of a teenage daughter, Ellen (Tracey Fairaway). But, as a hard-working divorcee whose only child is about to leave for college, Eva doesn’t have a lot to look forward to. While it’s true she has her share of friends, like Sarah (Toni Collette) and her husband Will (Ben Falcone), there isn’t much else going on in her life, and she now faces a potentially lonely time ahead.

Circumstances change one night, however, when Eva attends a party with Sarah and Will. While there, she meets Marianne (Catherine Keener), a divorced new age poet who’s in the market for massage services. And then, not long thereafter, Eva is introduced to Albert (James Gandolfini), a middle-aged museum curator with whom she shares a breezy mutual flirtation. All things considered, not a bad evening.

Like Eva, Albert is divorced and the father of a teenage daughter (Eve Hewson) who’s about to leave for college. He’s also a teddy bear personified, a quality Eva finds very appealing. But, in many other ways, Albert is far different from the men she has typically dated (or even been attracted to). The portly, unassuming everyman is nothing like her previous love interests, so, quite naturally, she wonders whether their relationship will succeed. The lingering hurt from her own divorce and the playful, but sometimes-nasty bickering of Sarah and Will make her a little gun-shy about romance, too. But, despite these concerns, she can’t deny her growing attraction to Albert, so she decides to take a chance and keep seeing him to find out what the future has in store.

Just as things start to progress well, however, Eva’s doubts become unexpectedly amplified. One afternoon, while massaging Marianne, Eva patiently listens to her vent about the irritating traits of her ex-husband. And, based on Marianne’s vividly detailed description, Eva soon discovers that her client’s ex bears an uncanny resemblance to someone near and dear to her – Albert. 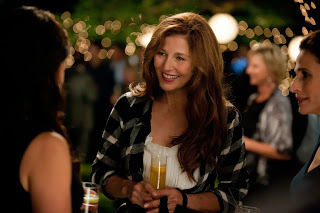 Suddenly, Eva has access to a wealth of intimate information about her new beau, unbeknownst to either Marianne or Albert. That realization proves to be a real game changer – one that could lead to a rich, new relationship or a potentially disastrous ending. How matters turn out will depend on what Eva does with that information – and how long she can keep mum about her unexpected knowledge of the truth.

Eva’s dilemma is a tricky one to manage, let alone resolve. She’s very drawn to the idea of having someone special in her life, and that’s evident by Albert’s appearance in it. She’s obviously put forth the intent to create that result, making use of beliefs that clearly support such an outcome (if that weren’t the case, Albert never would have shown up!).

But the challenge Eva has set up for herself goes beyond just attracting a new romantic interest. She’s also created a scenario involving the materialization of a partnership in which she and her significant other can be committed to one another and still seek the fulfillment of their individual needs. A relationship like that demands that the parties be themselves, that their thoughts and actions are governed by beliefs firmly rooted in honesty, sincerity, openness and personal integrity. And that’s where the tricky part comes in.

As events unfold, it’s apparent Albert has already come to that realization; he has no trouble being himself. In fact, his contentment with acting naturally apparently contributed heavily to the dissolution of his marriage; Albert’s laid-back, jeans-and-tee-shirts attitude simply didn’t jibe with Marianne’s pristine, everything-must-be-perfect worldview. And, after that experience, he knew that anyone with whom he became involved would have to accept him as he is or there simply wouldn’t be a relationship.

For Eva, however, being herself isn’t (and apparently never has been) easy. As someone who’s accustomed to catering to others, she’s inexperienced at tending to herself (i.e., at forming beliefs that manifest what she needs). She’s so concerned with pleasing others that she’s quietly – and constantly – afraid she’ll say or do the wrong thing. She also doesn’t want to fail at marriage a second time, and the overriding fear of that prospect significantly colors her beliefs. And then there’s Albert’s appearance and behavior, both of which Eva believes some people might find objectionable, a concern that factors greatly into her thinking about their relationship potential (a consideration incessantly fed by Marianne’s caustic comments, too).

Based on the foregoing, it’s easy to see how Eva might be discouraged from pursuing an involvement with Albert. But what about her undeniable attraction to him? Where is that coming from? Should she ignore it or embrace it? The persistence of such thoughts clearly shows she’s got more to consider than her past experiences or the rules of social etiquette. One would hope she realizes that the beliefs related to those considerations are far less important than those associated with the heartfelt feelings she’s beginning to develop. The big question is, of course, will she honor them? Indeed, will she allow herself to be herself and pursue the relationship her heart is urging her to follow?

This scenario thus raises some significant conscious creation lessons for Eva, such as (1) learning how to listen to one’s own intuition rather than blindly following the dictates of others or the experiences of the past, (2) being willing to think outside the box and move past arbitrary limiting beliefs and (3) giving oneself permission to materialize what one truly wants rather than what one believes one’s supposed to manifest. That’s quite a metaphysical course load, to say the least. 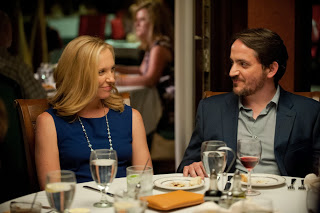 The playful, but sometimes-nasty bickering of married couple Sarah (Toni Collette, left) and Will (Ben Falcone, right) provides an interesting running commentary on the nature of relationships in “Enough Said.” Photo courtesy of Fox Searchlight Pictures.

However, as challenging as these issues might be for Eva, she can also take comfort in the fact that she’s also created the perfect circumstances for trying out these ideas. Albert is a model teacher, Marianne’s inside information provides clues on how (and whether) to proceed, and the relationship-related observations of Sarah and Will and of Eva’s ex-husband (Toby Huss) offer a valuable running commentary on the nature and value of mutually beneficial romantic partnerships. All of these elements combine to give Eva an ideal learning laboratory for this significant life lesson.

It’s an especially crucial time in Eva’s life for addressing the beliefs associated with these issues, too. As a single mother who’s about to embark on the empty nest stage, she’s looking for something to fill the void that will be created by Ellen’s departure. Will this be a time when she finally addresses her own needs, wants and desires? Or will she find herself alone, unsure about how to be generous and nurturing to herself (quite an irony given her vocation)? Or, in yet another option, will she fall back on familiar patterns of behavior and tried-and-true activities, such as becoming a sort of surrogate mother to Ellen’s best friend, Chloe (Tavi Gevinson), once her own daughter has left home? No matter what she decides, Eva has her work cut out for her. But, if she manages her beliefs and creations with metaphysical skill and dexterity, she stands to reap tremendous rewards. 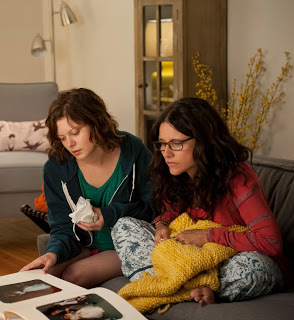 “Enough Said” is a terrific movie in virtually every respect. Filmmaker Nicole Holofcener has taken a quantum leap in her writing and directorial abilities with this offering, even if it is somewhat more conventional than her fine previous efforts. The picture is a terrific showcase for its excellent ensemble cast, particularly its two leads. Louis-Dreyfus turns in a terrific performance reminiscent of the well-intentioned, though often-clueless lead character she portrayed in her hit TV show The New Adventures of Old Christine, but with a deeper range of emotion than anything she demonstrated through that vehicle. And Gandolfini is positively adorable in a role that shows off the actor in a totally different light than what most viewers are accustomed to. The principals have an amazing chemistry together as well, coming off so naturally that you’d swear they were a couple in real life.

Sadly, it’s unavoidable to speak about this movie without addressing Gandolfini’s untimely passing before the film’s release. While I would like to think it’s possible to evaluate the actor’s portrayal of Albert purely on the basis of his performance, I find it impossible to separate Gandolfini’s depiction of the character from his own tragic circumstances. The off-screen story quietly and “inadvertently,” though nevertheless palpably, makes its presence felt in the film. But this “intrusion” is not entirely unwelcome; in fact, in some ways, it warmly enriches the rendering of the character. In knowing what we do about the actor’s unexpected demise, we can’t help but empathize for Albert more so than we might have ordinarily. Even though mortality is not an integral element of the story line, in light of what happened to the man who brought this character to life, we so want him to experience genuine happiness before it’s too late that we find ourselves pulling for him every step of the way.

I realize I may not be terribly objective or socially correct in saying any of this, but that’s how I felt as I watched this film. I truly applaud him for what he did for movie audiences with this role, and his production crew obviously felt the same way, as evidenced by the appearance of the touching words “For Jim” before the closing credits.

As this picture unintentionally reveals in unexpectedly prophetic ways, life truly is something we’d best not squander. Anytime we find ourselves engaging in pursuits where we fail to follow our hearts – especially in the arena of romance – we had better get our acts (and our beliefs) together as quickly as possible so that we can revel in the blessings that real love has to offer us.