Home/Archives/‘Way, Way Back’ offers a roadmap for those difficult years

‘Way, Way Back’ offers a roadmap for those difficult years

Growing up is hard to do. The harder we try to fit in, the more awkward we often feel. But, at some point, things start to click. We find our legs or our voice, and life starts to make sense. The more we understand about this – especially the role that we play in shaping how events pan out – the better off we’ll be. This is particularly crucial for those who feel like they’re under the thumb of others who would intentionally or unwittingly hold them back, circumstances not unlike those depicted in the hilarious new summertime comedy, “The Way, Way Back.” 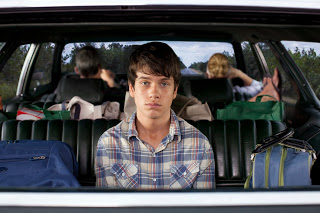 Spending the summer at the seashore may seem like a dream come true for many youngsters, but not for 14-year-old Duncan (Liam James). The prospect of vacationing with his divorced mother, Pam (Toni Collette), her overbearing boyfriend, Trent (Steve Carell), and his self-absorbed daughter, Steph (Zoe Levin), at Trent’s family beach house fills Duncan with dread. Besides there being little to do and no one his own age to hang with, Duncan has to contend with Trent’s unruly friends, Joan (Amanda Peet) and Kip (Rob Corddry), and his wacky, tactless neighbor, Betty (Allison Janney), all of whom epitomize the notion of “grown-ups behaving badly.” Pam tries to assuage her son’s feelings and smooth over his often-contentious relationship with Trent, but, if Duncan had it his way, he’d much rather be spending the summer with his father in San Diego.

To alleviate the tedium, Duncan goes exploring on his own. He ends up at the Water Wizz theme park, where he befriends Owen (Sam Rockwell), the park’s manager and resident cut-up, and his staff, Caitlin (Maya Rudolph), Roddy (Nat Faxon) and Lewis (Jim Rash). Owen takes the long-faced teen under his wing, showing him how to have fun and filling him with a sense of self-esteem, a quality frequently undercut by the adults in his life. He even offers Duncan a job, an opportunity he jumps at. 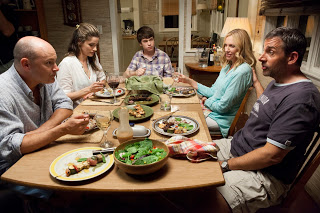 Spending the summer with mom (Toni Collette, second from right), her overbearing boyfriend (Steve Carell, far right) and his boorish friends (Rob Corddry, far left, and Amanda Peet, second from left) is not teenager Duncan’s (Liam James, center) idea of a fun vacation, as seen in the insightful seasonal comedy, “The Way, Way Back.” Photo courtesy of Fox Searchlight Pictures.

Before long, Duncan actually starts to enjoy his summer. Besides making new friends at work, he begins spending time with Betty’s teenage daughter, Susanna (AnnaSophia Robb), who provides a nice diversion from the increasingly irresponsible and sometimes-hypocritical behavior of the adults at home. He even grows confident enough to call them on their bullshit, an empowering experience for him and an eye-opening revelation for everyone else. By vacation’s end, the once-confused teen finds personal clarity.

The coming of age story is a long-established film formula, and “The Way, Way Back” is the latest embodiment of it. In that respect, the movie’s premise isn’t particularly original, but, then again, it never hurts to have cinematic examples that effectively remind us of the personal empowerment themes that characterize this genre, especially as they apply to conscious creation matters. 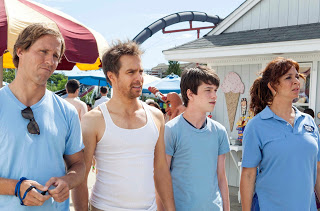 Finding friendship while working at a water park helps 14-year-old Duncan (Liam James, second from right) cope with an otherwise-dreary summer vacation, thanks to the camaraderie of the park’s manager (Sam Rockwell, second from left) and his staff (Nat Faxon, far left, and Maya Rudolph, far right), in the delightful coming of age comedy, “The Way, Way Back.” Photo courtesy of Fox Searchlight Pictures.

As obvious as it might seem, creating a reality that fulfills and satisfies us depends on doing so truthfully, with a clear sense of personal integrity. But such an undertaking may be difficult if we lack the requisite trust and belief in ourselves. As any conscious creator knows, beliefs are everything in making the process work, but a belief in oneself is perhaps the most crucial of all of the intents we draw upon in manifesting the existence we experience; without it, we’re essentially dead in the water (or, in Duncan’s case, in the wave pool).

Having sources of inspiration available to us is invaluable for generating the beliefs we need to build personal confidence and self-esteem, the elements that enable us to believe in ourselves. Thankfully, Duncan has access to such inspiration through the examples set by his Water Wizz colleagues and by Susanna. They help to imbue their friend with the attributes he needs to become himself. In fact, the examples they set enable him to become an example for others (such as the adults in his life) to follow.

In developing a sense of personal integrity, it’s critical that we follow the wisdom of our intuition, that inner voice that helps guide us in the beliefs we establish, the actions we take and the realities we materialize. Duncan learns this as he comes to believe in himself, faithfully following the inner guidance that steers him in the right direction. He gradually sheds the awkward, geeky attitude that characterizes him at the film’s outset, prompting changes that allow him to grow into the responsible, upstanding young man he ultimately becomes.

It’s ironic that Duncan evolves into a symbol of responsibility as the film progresses considering how often he’s initially criticized for even the smallest personality quirks or behavioral “transgressions” by the adults in his life, particularly Trent. They frequently blow Duncan’s actions completely out of proportion in demonstrable fits of exasperation, citing lofty platitudes to rationalize their comments. But, even though such criticisms are patently unjustified, is it any surprise that these incidents occur, especially in light of their own behavior? The irresponsible examples they set, which result from their actions (which Susanna characterizes as “spring break for adults”) and the beliefs that manifest them, are merely being reflected back to them through what they perceive as Duncan’s “reckless” behavior; he’s simply holding himself up as a mirror for them to use for assessing their own materializations, regardless of whether or not they acknowledge or approve of such actions or are willing to accept responsibility for them. Moreover, the changes in Duncan’s behavior eventually draw even more attention to their foibles, spotlighting just how immature and inconsiderate these grown-ups really can be. 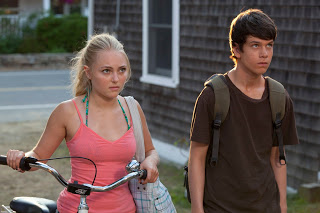 The companionship of fellow teen Susanna (AnnaSophia Robb, left) helps angst-ridden Duncan (Liam James, right) get over his plight in “The Way, Way Back.” Photo courtesy of Fox Searchlight Pictures.

This is not to suggest that Duncan becomes a joyless stick in the mud, either; far from it. However, he learns, through his interaction with Owen and the other adults in his life, how to distinguish between playfulness and recklessness. Owen is clearly a fun-loving guy who enjoys his life with a playful exuberance, but he’s always careful to avoid engaging in any behavior that would purposely harm others. The other adults, however, can’t say the same. Betty, for example, never hesitates to speak her mind in candidly colorful ways, but she sometimes fails to consider the impact her spontaneous utterances have on others. Likewise, Trent likes to play hard, but sometimes he fails to account for the pain his self-serving actions may inflict on even those closest to him. Duncan sees these distinctions and consequently develops beliefs for how he conducts himself that reflect this level of discernment. The grown-ups could learn a lot from him.

As noted earlier, the premise of “The Way, Way Back” may not be especially original, but what it lacks in originality it makes up for in skillful execution. This is one of the funniest, most articulate, most smartly written comedies I’ve seen in a long time, providing big laughs consistently throughout. It features an excellent cast, who flesh out their characters effectively, especially in the supporting ranks (give particularly high marks to Janney and to the many talented young actors in this picture). In fact, it’s regrettable that the film’s trailer really doesn’t do the movie justice; given the rave reviews and warm reception it has received thus far, this picture could be well on its way to becoming the sleeper hit of the summer, especially if word of mouth recommendations build a case for it as happened with such past surprise hits as “My Big Fat Greek Wedding” (2002) and “The Full Monty” (1997).

At some point in our adolescence, in the midst of what probably seemed like incessant confusion, we were all likely cryptically told by our elders that “someday you’ll understand.” The fortunate among us were able to figure that out sooner rather than later, though others of us no doubt reached middle age without a whiff of any greater clarity. So the sooner (and more thoroughly) we come to understand ourselves (especially our beliefs), the better off we’ll be at creating our reality and manifesting a more fulfilling life. “The Way, Way Back” provides valuable clues on how to go about this, offering tips that, one would hope, teens (and late-blooming adults) can grasp and embrace to make their lives at least more tolerable, if not downright enjoyable.

Now how rad is that?