‘House of Cardin’ celebrates the joy of creativity

Style – it’s something that can be challenging to get right but all too easy to get wrong. Achieving success at it can seem like a random, even capricious endeavor. But when it works, it works. And, if someone manages to make a habit out of catching the brass ring, that’s one fortunate individual indeed. Such has been the case for a truly inspired innovator who has left his mark on the design world in multiple milieus, the subject of the engaging new documentary, “House of Cardin.”

Designer Pierre Cardin has left – and continues to leave – an indelible mark on the world of fashion. Born in Italy but having spent nearly all of his life in France, the 98-year-old Cardin initially was encouraged to study architecture at the behest of his father, but he was much more interested in dressmaking. In the 1940s, he worked in several Parisian design houses, most notably that of Christian Dior. He rose through the ranks quickly, in large part because he could do more than just sketch designs; he was also a tailor who knew the mechanics of what it took to successfully create finished pieces of clothing. It earned him enough of a reputation that he was able to launch his own house in 1950.

Through his work on several successful noteworthy projects, Cardin’s profile rose rapidly. But his contributions to the fashion industry involved more than just his inventive designs. At a time when high fashion was generally considered something for the genteel elite, he leveled the playing field by creating ready-to-wear clothing that could be made and sold affordably to the masses. And he made his mark by labeling all of his creations with the now-familiar Pierre Cardin logo. Such practices set the industry on its ear as they “democratized” the world of couture, making it possible for everyone to now purchase designer items, not just those who looked down their noses at those who couldn’t afford high-priced pieces.

But Cardin’s innovation didn’t stop there. As the free-wheeling ʼ60s revved up into high gear, he introduced designs that drastically changed the look of what was considered fashionable. He employed simpler, cleaner lines, with far fewer ruffles and folds. He used geometric patterns, modernist influences and bold colors, qualities rarely seen in what typically qualified as haute couture. And he introduced elements found in fashions from around the world, most notably Japan. These were radical departures from what was being touted by most of the French design houses. 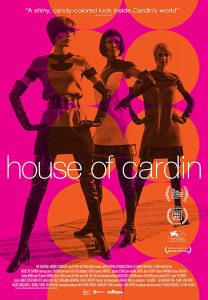 Cardin didn’t limit himself to the world of women’s fashion, either. He introduced lines for men, something that was almost considered unthinkable at the time. The prevailing wisdom was that the majority of men had no interest in such matters (and that those who did were of questionable masculinity). However, Cardin smashed through such stodgy and prejudicial attitudes, introducing the male of the species to new and more inventive clothing options, offering them choices that they never had before.

As the Cardin label gained wider acceptance and recognition, he began licensing it to the manufacturers of other consumer goods. This included everything from cosmetics and perfumes to eyewear and even aircraft and automobiles, such as the 1972 Cardin Javelin from American Motors. Such efforts enabled budding designers working under him to gain exposure for their creations while simultaneously building the Cardin empire.

Given his success, Cardin was also anxious to give something back. In addition to providing a platform for rising stars in the design industry, he did the same for emerging artists and performers, bankrolling venues for their work. This enabled him to fulfill his own vicarious dreams in the arts while giving protégés and performers much-needed exposure, all backed by a name that carried considerable clout and credibility.

While the film focuses largely on Cardin’s creative and business ventures, it also examines his personal life. Given that Cardin has typically been a very private individual, this subject does not account for a sizeable part of the narrative. But, through archive footage and interviews with friends and colleagues, viewers learn of Cardin’s presumed relationships with actress Jeanne Moreau and fellow designer Andre Oliver.

Looking back on Cardin’s storied career, he has truly achieved a lot in his years of work. But, even at 98, he remains active and engaged in his various ventures, believing that, if he ever stops, he’ll lose his reason for being. We should all be fortunate to be that vital at such an age, but, as a designer, who better than he to create a pattern for us to follow? 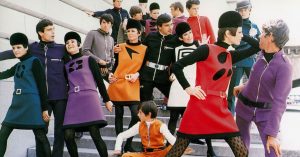 The innovative creations of fashion designer Pierre Cardin provide the focus of “House of Cardin,” a new documentary charting his storied career, available for online streaming. Photo courtesy of Utopia.

Considering Cardin’s numerous innovations, many would call him a visionary. He transformed fashion and consumer product design, and he reshaped these industries in ways that broke down conventional barriers. And those changes have proved to be more than just passing fads, persisting since their implementation. But just where did these revolutionary new ideas come from?

Imagination is the starting point of virtually any new conception. But they only come into being through the power of our beliefs, the building blocks of the conscious creation process, the philosophy that maintains we draw upon these resources in shaping the reality we experience. In Cardin’s case, he drew upon them constantly in taking his ideas out of the world of imagination and into the realm of manifestation. And, even if he had never heard of this philosophy, based on his track record, it’s obvious he’s a master of its principles, and he put that knowledge to work in myriad ways.

Unlike other designers, Cardin had a distinct advantage that helped drive his success. As noted previously, his tailoring skills set him apart by providing him with the knowledge of the workings of clothing design. Because of that, he had both the ability to envision and create new looks and the knowledge to understand how to make them work. And that dual nature of his skills stemmed from his expertise in developing beliefs that covered both areas, enabling him to produce inventive and workable designs.

Proficient conscious creators understand the power in that. They readily recognize that the ability to form beliefs for both devising new conceptions and developing the means to bring them into being is a powerful combination, one that’s crucial to success in the application of the philosophy in virtually any field of endeavor. Cardin set a powerful example in that regard, one that we could all learn from, no matter how we employ these principles in our lives.

Much of Cardin’s success is also attributable to his ability to see past convention and limitations. In an industry steeped in tradition and an established mindset, change came slowly, despite a reputation for intrinsic creativity. The influences that Cardin drew upon and subsequently incorporated into his work often came from outside the sources his peers used – modernism, color, geometric patterns, cross-cultural elements, and even the impact of burgeoning developments in science and technology. By thinking outside the box and tapping into these unlikely influences, Cardin created radically new and different fashions. Add to that his savvy marketing skills, which also pushed through existing barriers, and the industry suddenly had a bold new innovator in its midst.

But, perhaps more than anything else, there was Cardin’s sheer enjoyment of the creative process, something that’s still apparent in his life as it nears the century mark. The drive to continually manifest new creations is powerful – and empowering – a practice that helps to keep the mind of the nonagenarian vibrant and vital. And, in the process, its power benefits us all, too, providing us with an ongoing resource of inventive new designs, adding to our quality of life. If anyone ever doubts the benefits that creativity affords, one need only look to this example and see what it has done for both the creator and his beneficiaries.

This rare look into the life and career of this design visionary provides an insightful examination of how one man almost single-handedly changed an industry and its output. Directors P. David Ebersole and Todd Hughes have compiled an impressive array of archive footage and recent interviews with Cardin and his friends and peers, such as fellow designers Jean-Paul Gaultier, Hanae Mori and Philippe Starck; Vanity Fair contributor Amy Fine-Collins; artists who have benefitted from his support, including Jean-Michel Jarre and Alice Cooper; and actresses and models who have worn his designs, such as Naomi Campbell, Sharon Stone and Dionne Warwick. While the film has an occasional tendency toward worshiping its subject, its treatment is generally reverent, respectful of his accomplishments and careful to avoid delving too deeply into private matters that are truly no one’s business. This delightful documentary is an ideal choice for those who appreciate good design, no matter what form it comes in. The film is available for online streaming.

Some may find today’s preoccupation with designer labels shallow and banal, and a good argument could be made in favor of that notion. However, if we look past the logos, the tags and the embroidered stitching, it’s entirely possible to find some truly inspired inventiveness, especially when it comes to stylish new looks. Pierre Cardin has made tremendous contributions in this regard, and he helped to make them more accessible to a wider audience than his predecessors. That’s quite an accomplishment – and one that looks great, too.