Home/Comedy, Conscious Creation, Movie Reviews/‘Lucky Grandma’ urges us to know when to step back

‘Lucky Grandma’ urges us to know when to step back 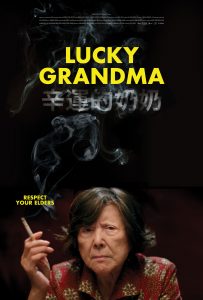 Turning away from a good thing can be hard to do. The seductive nature of good fortune can be difficult to back away from, especially once we’ve had a taste of it. But over-imbibing can have its drawbacks, sometimes more dire than anticipated, leading to all kinds of unpleasant consequences. Such is the case for a lucky streak run amok in the raucous new Chinese-American comedy, “Lucky Grandma.”

For Grandma Wong (Tsai Chin), a longtime resident of New York’s Chinatown, life hasn’t been easy. She and her husband spent many years toiling to make ends meet, an experience that hardened the feisty, chain-smoking matron to the often-unfair ways of the world. But even that background hasn’t fully prepared her for her present circumstances. Now that she’s in what are supposed to be her golden years, a time to finally kick back and relax, she’s doing it alone, her spouse having recently died. Her son, Howard (Eddie Yu), would like her to move in with him and his family in suburbia, but she sees that as nothing more than just a new set of limitations not unlike what she has experienced throughout much of her life.

To see what the stars have to say, Grandma Wong decides to visit Lei Lei (Wai Ching Ho), a fortune teller. Much to her surprise, Grandma learns that a streak of unbelievable good luck awaits her in the near future. Lei Lei says that everything points to endless abundance and boundless good fortune, even if adverse forces try to impinge upon her. So, armed with that advice, Grandma decides to throw caution to the wind and see what happens. She withdraws all the funds from her bank account, hops on a charter bus and heads for a Connecticut casino. And, just as Lei Lei predicted, Grandma can do no wrong when it comes to her wagering, amassing a small fortune. Alas, things fall apart when she places a bad bet – and loses everything. 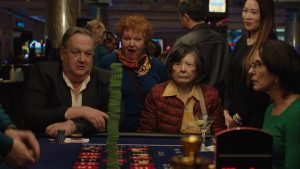 On her way back to New York, Grandma sulks over her losses, a condition made more irritating by the man sitting in the seat next to her, who keeps slumping over on top of her. She soon discovers, however, that he isn’t sleeping; he’s dead, having apparently expired from a heart attack. And, not long thereafter, when the bus makes a sudden stop, a duffel bag from the overhead rack drops down and lands in her lap – literally. It turns out to be the dead man’s bag, and it’s filled with cash, even more than she lost on her ill-fated bet. So, with her luck apparently still holding, upon arrival back in New York, she quietly slips off the bus, taking the bag with her.

What Grandma doesn’t realize, however, is that the dead man sitting next to her was Mr. Lin (He Jun Miao), bookkeeper for the Zhangliong street gang, a criminal organization currently at war with the rival Red Dragon gang. She learns of this when she comes home from a Chinatown shopping spree and finds her apartment ransacked by two Red Dragon members, Little Handsome (Michel Tow) and Pock-Mark (Woody Fu). They question her about the money, suspecting she’s got it well hidden someplace. But Grandma plays dumb, drawing on her street smarts to bluff her way out of the situation (not an especially difficult task given the dimwitted nature of her uninvited guests). Still, despite her seemingly convincing cover story, the henchmen leave her with a stern warning before they depart, a threat that causes Grandma to realize she needs professional protection.

In short order, Grandma seeks out the services of a bodyguard from a local protection racket. After some dickering about the price and the personnel with Lao Shei (Zilong Zee), the head of the outfit, she settles on hiring Big Pong (Corey Ha), a somewhat daft, seemingly gentle giant who nevertheless knows how to throw around his muscle when circumstances warrant. The unlikely duo quickly grows close, with Grandma offering her cohort sage advice on par with the protection he affords her. However, during their time together, she learns of his affiliation with Zhangliong. Through the grapevine, she also learns about the gang’s leader, Sister Fong (Yan Xi), a cunning, ruthless criminal who’s not afraid of cutting deals – or throats – to get her way. And, with Grandma secretly holding the Zhangliong money she took from Mr. Lin, she now faces the prospect of two sets of criminal elements pursuing her, including one linked to her personal bodyguard. At this point, she has to ask herself, how much longer will her luck hold out? 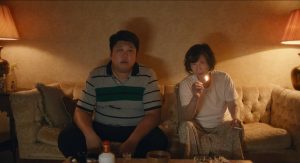 Given the life she’s led, Grandma is ready for a break, eager to be cut some slack. For all she’s done, she justifiably feels like she’s owed something, that it’s time for a little good luck (or, in her case, a lot of good luck). And, as the fulfillment of Lei Lei’s prediction demonstrates, Grandma indeed gets her wish. Even though her streak of good fortune runs counter to what she has typically experienced over the years, on some level she definitively staked an intent for that to change, making it perfectly clear that she wanted something different for herself now, the evidence of which is apparent in her newfound overflowing abundance.

So how did this all come about, especially since it’s so unlike Grandma’s track record? From the presence of a Buddhist altar in her living room, it’s obvious Grandma is quite a person of faith, trusting the divine spirit to aid and protect her, to help make her wishes and dreams come true. And that collaboration is at the core of her good fortune. By confidently staking her intent and firmly believing in its materialization with the aid of her celestial partner – God, Buddha, the Universe or whatever one wants to call it –  Grandma now finds herself rolling in dough. This is the kind of alliance that drives the conscious creation process, the philosophy that maintains we manifest the reality we experience through the power of our thoughts, beliefs and intents working in conjunction with the power of our divine collaborator.

Even if Grandma is unfamiliar with the philosophy itself, it’s obvious she understands its principles and knows how to make them work. Evidence of what’s about to unfold is present through all of the divining tools Lei Lei uses, and the message is so clear that she can’t help but interpret it any other way. And, once Grandma is informed of the message, she confidently embraces it, immediately taking steps to bring it into being by cashing in her life savings and heading for the casino. What’s more, her wish materializes so solidly that, even when she thinks she’s lost everything, her luck continues. That’s quite a confirmation. 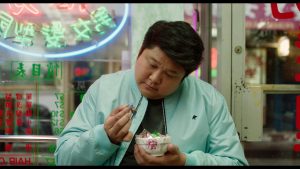 Of course, in our exhilaration over the fulfillment of our intents, we mustn’t lose perspective, either. When the Universe provides us with what we’re looking for, we must be careful not to push it too far, for that can lead to all kinds of unintended side effects. For instance, when Grandma had amassed a huge fortune at the casino, she should have considered walking away once it materialized. By holding out for more, perhaps even getting a bit greedy, Grandma gave her divine collaborator another (and unwarranted) good shove, risking everything and losing it all. Likewise, when she made up for that loss with the windfall that fell squarely in her lap, she also opened herself up to all of the consequences she subsequently experienced. And on and on it went for the duration of her story. All of which goes to show, as practiced conscious creators are well aware, the Universe naturally leans in our direction, so there’s no need to push it to get our way.

This, in turn, illustrates the inherent responsibility associated with the conscious creation process. Since the intents we seek to be fulfilled originate with us, we have an innate accountability for what happens, both in their initial manifestation and their subsequent consequences. All the trouble that results from Grandma swiping Mr. Lin’s bag, for instance, stems from her, for she’s the one who set the process in motion. It’s unclear what might have happened if she had just stepped forward and returned the cash, but, as gang leader Sister Fong acknowledges in a seemingly chance encounter with Grandma, she’s not above cutting deals when they suit her needs. Of course, consorting with criminals may not be the wisest course, either, but an equitable agreement reached to avoid further trouble might have been preferable to all of the other fallout that occurred.

Still, even when things go terribly awry, they often have a way of working themselves out for the best. Again, this rests with honoring our intents, having faith that they’ll materialize as hoped for, trusting our divine collaborator to see to the fulfillment of our wishes and knowing when to apply the brakes. Under such circumstances, we’re likely to find ourselves sitting exactly where we want to be. Indeed, maybe there’s hope for Grandma yet.

Despite a slight tendency to meander late in the second half, this smartly written, consistently hilarious comedy comes up a winner on many fronts. This send-up of cheesy Chinese crime dramas, mixed with touches of understated wit and campy humor, makes for a warm, funny and touching tale, with an excellent, award-worthy lead performance by Tsai Chin and a fine supporting cast. Director Sasie Sealy’s feature film debut is easily one of the most humorously entertaining offerings to come along in quite some time. See it on first-run online streaming.

We’re all aware of what can happen when we experience too much of a good thing. The process of reaching that point may have its moments of unbridled pleasure, but the resulting aftereffects may be more than we want to handle. So, when “last call” comes up – no matter what the context – we’d be wise to abide by it, for it can save us considerable discontent afterward. And that’s a pretty safe bet.