Children frequently delight in the power of magic. They appreciate the wonder it engenders, and they often look on in wide-eyed awe at what it can produce. But, somewhere along the line, many of us lose that sense of amazement as we age, believing that such notions are little more than foolish, childish fantasies. What’s worse, due to the difficulties of prevailing circumstances in many of our lives, some of us may never discover the joys of this endearing aspect of life to begin with, denying us one of the tremendous pleasures of childhood. And, unfortunately, in either case, we often end up divorced from the skills and mindset that a genuine belief in magic affords us, separated from valuable tools that can help us achieve happiness and fulfillment in life. When this happens, we need something to help us discover or rediscover what we’ve lost or never found, the kind of fun-filled intervention offered by a specially gifted miracle worker in the long-awaited sequel to a Disney musical classic, “Mary Poppins Returns.” 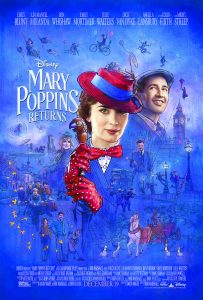 Times are tough in Depression Era London, and even those who were once relatively well off are experiencing the financial pinch of “the Great Slump.” So it is for the family of Michael Banks (Ben Whishaw), a middle-aged aspiring artist and temporary bank employee who struggles to make ends meet for himself and his three children, Annabel (Pixie Davies), John (Nathanael Saleh) and Georgie (Joel Dawson). But monetary worries are the least of his troubles; he’s also wrestling with the grief of the recent loss of his wife, as well as the chaos of living in a home that’s gradually becoming run down. He gets some help from his housekeeper, Ellen (Julie Walters), and his social activist sister, Jane (Emily Mortimer), but the ever-growing list of challenges weighs heavily on him.

If all that weren’t bad enough, though, an even bigger setback occurs when the bank holding the mortgage on Michael’s home announces that it’s about to foreclose on the property. The beleaguered Mr. Banks has less than a week to make good on his delinquent payments or risk losing the house. To cope with this, Michael and Jane appeal their case to Mr. Wilkins (Colin Firth), the chairman of the bank, who appears to sympathize with their plight but doesn’t offer any particularly special accommodations, despite the longstanding relationship that he and the institution have with the family (three generations of Bankses have been employed by the organization). 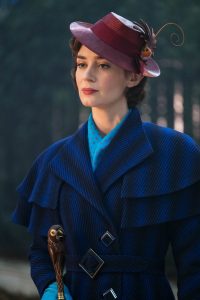 Wondrous and whimsical nanny Mary Poppins (Emily Blunt) makes a return engagement to a family in need of her own special brand of help as seen in the long-awaited sequel to the 1964 Disney classic, “Mary Poppins Returns.” Photo by Jay Maidment © 2018 Disney Enterprises, Inc.

Needless to say, these challenges make for pretty glum conditions in the Banks household. As world-weary adults, Michael and Jane have lost much of the happy-go-lucky spunk that they relished when growing up. And the children, who, by their own initiative, have commendably stepped up to take on more responsibilities, are nevertheless missing out on many of the joys of youth that all kids should be allowed to experience. Something clearly needs to be done to turn things around, but, considering what the family is up against, it’s obvious that a miracle is what’s really needed.

Enter Mary Poppins (Emily Blunt), the whimsical, wondrous nanny who helped raise Michael and Jane. She arrives out of the blue, apparently not having aged a day in 30 years, to help with the upbringing of a new generation of Banks children, as well as to help Michael and Jane recover some of the joy that they once had but have since lost. Together with an old friend, Jack (Lin-Manuel Miranda), a kindly lamplighter, her eccentric cousin, Topsy (Meryl Streep), and an assortment of colorful live and animated cohorts, Mary introduces Annabel, John and Georgie to an array of extraordinary experiences that provide them with fun times and a host of valuable and practical life lessons. At the same time, Mary helps her former charges rediscover what they had forgotten, easing their burdens and restoring their faith in the magic that makes life worth living. 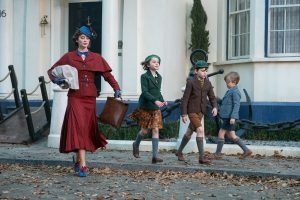 While Mary has retained many of the charms she possessed from her previous go-round (as seen in this film’s predecessor, “Mary Poppins” (1964)), there are some new subtle differences in her character. For instance, given the hardships of the 1930s and the challenges the Banks family faces, Mary is more of a “realist” this time out, recognizing the seriousness of the circumstances and bringing a practical attitude along with her, one focused on solving problems yet never losing sight of the quaintness, eccentricity and creativity that helped to distinguish her personality, outlooks and methods. What’s more, Mary is also a bit “saucier” this time, a bearing more reflective of the times (and the sensibilities of contemporary movie audiences) and less unrealistically saccharine encrusted. The result is a Mary Poppins who’s readily recognizable but more in step with the times during which the story is set (and for the time that the film is being released).

What hasn’t changed is Mary’s fondness for working her magic through song. In a series of skillfully orchestrated musical numbers involving singing, dancing and animation, Mary, Jack, the children and an assortment of kindreds including everyone from Topsy to a kindly balloon lady (Angela Lansbury) joyfully convey their messages and work their magic for the benefit of one another as well as those watching from the audience. (It’s good to see that some things don’t change.)

The messages that come through are valuable ones, too, especially for impressionable young minds and those who can use a fresh new perspective. In virtually every instance, Mary and company stress the magic attainable in life – provided we allow it. Outcomes like that may seem unlikely to some but wholly plausible to others. The difference lies with one’s beliefs, the cornerstone of the conscious creation process, the philosophy that maintains we use those metaphysical building blocks to manifest the reality we experience. And, even though Miss Poppins may not use the term “conscious creation” to describe what she professes, the intent behind this philosophy and her teachings are essentially identical. 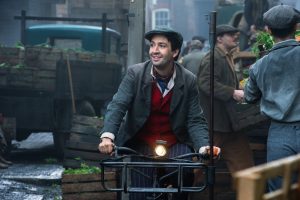 On a number of occasions during the film, Mary makes it plain that anything is possible as long as we believe in the outcome. To accomplish such ends, she encourages us to take such steps as adopting new perspectives, envisioning what we want, breaking through limitations that hold us back, and confidently and playfully facing our fears. All of these principles are core elements of Mary’s personal point of view, but they’re also key concepts for making conscious creation work.

Inherent in all of the foregoing notions is the idea that we’re each innately responsible for what we create – and that it’s up to us to come up with the solutions we need to resolve our challenges. Unfortunately, this is a crucial life lesson that many of us have tried to disavow (with varying degrees of success) or that we may have never learned in the first place, leaving us without an important coping skill for navigating our way through our existence. In light of that, then, it’s heartening to see a picture that encourages its viewers – especially young ones – to embrace these concepts. The messages may come dressed up in a pretty, colorful package, but the information they impart is undeniably important, lessons that will undoubtedly prove useful on our respective journeys (and the sooner we learn them, the more ingrained they’ll likely become as part of our mindset for life). Way to go, Mary! 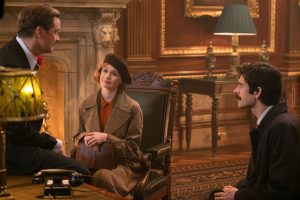 In the interest of full disclosure, I was skeptical about this one and wasn’t particularly looking forward to seeing it. I must admit, however, that I enjoyed it much more than I was expecting, especially since remaking classics or creating sequels to them is very risky business (and something that often makes me cringe). This offering does justice to the original, thanks to its excellent production values and many fine performances. Its enjoyable soundtrack isn’t quite as memorable as its predecessor, but, unlike many contemporary musicals, it’s far from forgettable. Emily Blunt pays perfect homage to the legendary character and is worthy of whatever acclaim that comes her way, and kudos are definitely due its fine cast of supporting players. The film is, unfortunately, somewhat episodic, using the sometimes-thin narrative between musical numbers mostly as a bridge to link the songs to one another. Otherwise, though, this is a capably made and surprisingly delightful release.

Though critical acclaim for this film has been a little soft, the picture has nevertheless fared well in awards competitions. Both the National Board of Review and the American Film Institute have named “Mary Poppins Returns” as one of their top 10 films of 2018. In the recently announced Golden Globe Awards competition, the picture picked up four nominations, including best comedy picture, best comedy actress (Blunt), best comedy actor (Miranda) and best score, though it took home no statues. In the upcoming Screen Actors Guild Awards, Blunt earned a nomination for best leading female, and, in the BAFTA Awards contest (the British equivalent of the Oscars), the picture has captured three nominations for original score, costume design and production design. The film’s greatest haul of nominations, though, has come in the Critics Choice Awards program, earning nine nods, including best picture, actress, actress in a comedy, score, visual effects, production design and costume design, as well as two nominations for original song. 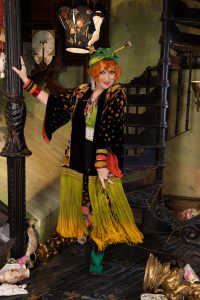 Topsy (Meryl Streep), the eccentric cousin of a nanny known for working her own brand of magic, helps others get a new view on life (and vice versa) in the whimsical new musical comedy, “Mary Poppins Returns.” Photo by Jay Maidment © 2018 Disney Enterprises, Inc.

Those familiar with my work know that I seldom write about children’s films, as they’re simply not part of my target audience, and many of them don’t meet the criteria for my review selections. However, when one comes along that can entertain the little ones and, one would hope, teach them some valuable life lessons, then I’m more than happy to give them a look in hopes that their parents will take them to see these pictures for both fun and perhaps a little enlightenment. “Mary Poppins Returns” is just such a film, one that the kids are sure to enjoy. And, who knows, their folks may get a little something out of it as well, just like Michael and Jane Banks.

Finding satisfaction in life can often be challenging enough in itself, but, without a belief in the power of magic, one of the forces than can help to bring it about, the process can be that much more problematic. Thus it’s in our best interest to keep sight of this force for good and cultivate it whenever we can. Considering the alternative, it’s really not too much to ask of ourselves; indeed, we truly have nothing to lose and everything to gain. The magical Mary Poppins reminds us of this, and, if we know what’s good for us, we had better listen to her.