Home/Archives/‘Fences’ wrestles with the limits of personal barriers

‘Fences’ wrestles with the limits of personal barriers

The parameters of our existence define the reality we experience. But who or what defines those parameters? Discovering the answer to that question has been a source of debate for eons, but, when we take a really close look at it, we find that the responsibility rests squarely in our own hands, an idea thoughtfully explored in the engaging new stage-to-screen adaptation of playwright August Wilson’s Pulitzer Prize-winning work, “Fences.”

Troy Maxson (Denzel Washington) is a walking contradiction. As someone with a somewhat checkered past, including a stint in prison, he’s spent much time and effort since his release trying to get things straight in his life. Having missed his shot at becoming a standout baseball player (partly due to his jail time cutting into what would have been a promising career), he has since worked hard to make something of himself. He now holds a regular job as a trash collector for the City of Pittsburgh, and he’s determined to move up to the position of driver, a promotion that would make him the first in the city, quite an accomplishment in the pre-Civil Rights Era of the 1950s.

Troy has also worked hard at being a good husband, father, brother and friend. He adores his wife, Rose (Viola Davis), and he has done his best to instill a sense of responsibility in his sons, Lyons (Russell Hornsby) and Cory (Jovan Adepo). He does everything he can to care for his brother, Gabriel (Mykelti Williamson), a victim of a severe World War II head injury that has left him emotionally unstable and routinely delusional. And he’s always generous to his good friend and co-worker, Jim Bono (Stephen McKinley Henderson), who never hesitates to return the favor.

But, in spite of these laudable attributes, Troy has a darker side, too. Some might say he drinks a little too much. Despite his love for Rose, he’s been having an affair behind her back, one that has led to the unplanned conception of a love child. What’s more, despite his concern for his sons developing a sense of personal responsibility, he’s so hard on them that he often drives them away by continually doubting their reliability to keep their word or insisting that they pursue the ambitions he believes they should follow. And, even though he claims he’s got Gabe’s best interests at heart, some would say that some of his tactics in that regard aren’t entirely above board. 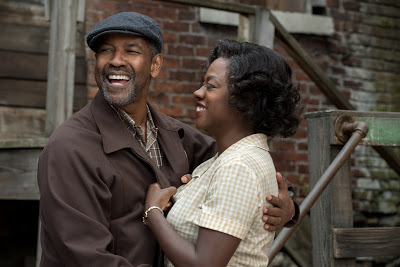 Troy’s conflicted behavior, to some, might indicate a proclivity toward self-sabotage. Despite his verbal protestations to the contrary, his actions often indicate otherwise. His own difficult past, it seems, has forced him into being unduly hard on himself. It’s as if he’s continually punishing himself for past mistakes. Just when he’s about to get ahead in some way, something always seems to come along – generally of his own making – to set him back. And, when he’s not inflicting harms on himself, he ostensibly projects this metaphysical form of self-flagellation onto others, like Lyons and Cory. Despite his claims of offering such “advice” for their own good, he needlessly drives a wedge between him and them, perilously endangering those relationships.

One might wonder why someone would purposely draw such circumstances into his or her life. This is especially true among those who are familiar with the operation of the conscious creation process, the means by which we manifest the reality we experience through the power of our thoughts, beliefs and intents. However, in instances like these, such experiences are generally attributable to learning certain life lessons, and those that Troy is materializing for himself are particularly difficult examples of such teachings. Indeed, in the process of our soul’s growth, development and evolution, we must all eventually go through such things, if for no other reason than to learn how not to repeat them.

Unfortunately, Troy is trapped – and he doesn’t know how to resolve his circumstances nor how to remove himself from them. And, fittingly, that’s where this story’s title comes from. One of the long-standing home improvement projects Troy has been working on (or, more precisely, intending to work on) for years is the construction of a fence on the periphery of his property’s backyard. His protracted procrastination has even become a source of considerable ribbing. But, all jokes aside, as Mr. Bono astutely observes in one scene, “Some people build fences to keep people out, and other people build fences to keep people in.” In Troy’s case, he’s done some of both metaphorically speaking, keeping at bay those most able to help him and unwittingly penning himself within the confines of his own limiting outlooks. And, over time, it becomes an increasingly more imposing situation, one that threatens to keep him permanently locked in place.

So how does one rectify such circumstances? As conscious creators well know, one of the chief aims of this philosophy is to push through our perceived personal limitations. And, given that our existence springs forth from the beliefs we maintain, that’s where the review process should begin. 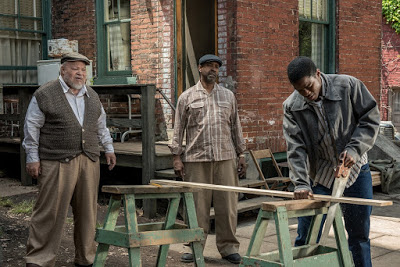 For all of his attempts at changing his life, Troy is nonetheless bought in to an array of limiting beliefs that prevent him from moving forward. Some of them no doubt stem from his upbringing and personal history. Others can be chalked up to an attitude of “that’s just the way things are.” Regardless of their source, however, these beliefs no longer serve him. They may have worked in the past, and they may have even been invaluable to learning the life lessons he’s already experienced. But that doesn’t necessarily mean that they must remain in place as part of his prevailing worldview as he marches into the future.

In some ways, Troy understands the need to embrace new beliefs. Some of his undertakings, such as his pursuit of becoming a driver, indicate this, too. At the same time, though, he stubbornly holds onto outmoded notions that allow him no breathing room for growth. For instance, when Lyons asks to borrow some money to get him through a tight spot, Troy repeatedly berates his son in front of Rose and Jim, saying that he’ll never see those funds again, despite Lyons’s assurances to the contrary. Even though Troy’s tone is somewhat playful, his meaning is clearly disparaging. Whether Troy’s conclusion is rooted in Lyons’s past failures at repaying loans or a projection reflecting insecurities over his own onetime personal financial mismanagement issues, in either case it’s based on a belief that obviously stems from the past, regardless of whether it’s still relevant in the present. Such belief tendencies, unfortunately, can be extremely hindering, especially if we’re trying to get beyond what came before to move on to what’s next. And that doesn’t even take into account what damage such an outlook might be doing to his interpersonal relationships.

At the same time, this is not to suggest that all is lost, either. On some level, Troy recognizes the need for assistance in getting himself out of his own way, and, to that end, he has successfully drawn others into his life to aid him in doing just that. His sons, for instance, set excellent examples of taking personal responsibility, even if their actions don’t necessarily match what Troy believes they should do to demonstrate that capability. Moreover, the presence of his beloved Rose illustrates that it’s indeed possible to attract loving, supportive souls into his existence to assist him with his various personal challenges. Even his unborn love child holds incredible promise for helping him alter the course of his impending future. Troy truly has the potential to benefit tremendously from all of them, provided he allows their influence in to help him shape the tenor and character of his beliefs. Whether or not he does that, however, depends on how widely he’s able to extend his envisioning abilities and how courageously he’s willing to exercise his powers of choice and free will. In the end, that’s all on him.

What’s more, numerous paths to redemption are open to the beleaguered protagonist. He’s not stuck with the existence he believes he’s been saddled with; new vistas are attainable by starting over. But, once again, he must be able to picture these lines of possibility in his own mind and then act on them through the beliefs he forms to mold the reality he experiences. He can indeed atone (and forgive himself) for the missteps of his past – and even his present – by charting new paths. The question is, of course, will he?

It might be easy for some to look at Troy’s odyssey and say “He brought this all upon himself,” and, in a sense, they’d be right. However, must we perpetually shoulder the burdens of our erroneous ways? Are we locked into patterns of thinking and being that are irretrievably unalterable? Can we leave our woes behind, finding a new way and the peace of mind that goes with it? As conscious creation maintains, the answer is a resounding yes, but we must assume the responsibility and take the initiative to do so. Others may help to show us the way, but the impetus is on us. One can only hope Troy discovers this for himself before it’s too late. 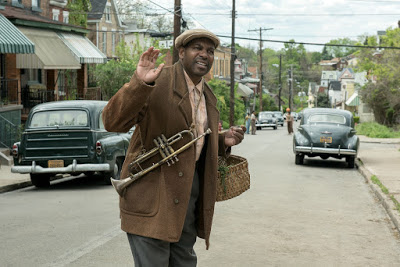 Severely damaged by wartime injuries, Gabriel Maxson (Mykelti Williamson) wanders the streets of Pittsburgh in a delusional state, an ongoing challenge for his family to deal with in director Denzel Washington’s “Fences.” Photo courtesy of Paramount Pictures.

“Fences” offers viewers a faithful theater-to-screen adaptation of its source material that, refreshingly, doesn’t feel particularly stagey (as often happens with such translations). The film features superb performances by the excellent ensemble cast, all of whom earnestly bring their characters to life and captivate us from start to finish. This is especially true for Davis, who is clearly in her element here, Washington, who turns in his best work since “Malcolm X” (1992), and Williamson, who delivers a performance that, regrettably, has stayed off the recognition radar this awards season. Playwright August Wilson’s screen adaptation of his own work generally sparkles, despite a slight tendency to drag a bit in a few spots. Nevertheless, the picture is a well-crafted vehicle for telling its story, deftly mixing humor, heartfelt emotion and riveting drama, not an easy fusion to realize.

The barriers we place around ourselves shape the existence we experience on the earthly plane, so, if we’re to get the most out of it, we had better set our sights carefully. We must also recognize that we’re not prisoners of our own fences, no matter how seemingly imposing or impenetrable they may appear. In the end, we can always rebuild them in ways that enable us to become enrapt in the kinds of joys and redemption we thought inaccessible. Indeed, we need not stay stuck; rather, we can attain all the wonders we’re capable of envisioning – as long as we allow ourselves to do so.