Being willing to face the truth of our lives can be a difficult and painful lesson at times. Under such circumstances, it may be tempting to look away in hopes that the difficulties will somehow just evaporate. But such wishful thinking seldom pans out as hoped for, leaving us with problems that are even larger to contend with, as becomes all too apparent in the new Woody Allen comedy-drama, “Blue Jasmine.”

Fifth Avenue socialite Jasmine (Cate Blanchett) has taken a very hard fall. Having once been married to Hal (Alec Baldwin), one of New York’s most successful financial wizards, she experiences quite a come-down when he’s indicted and convicted on a range of illegal activities. Her implicit trust in her crooked husband leaves her financially destitute. But, if that weren’t bad enough, she also learns that he’s been cheating on her for years with one of her best friends (Kathy Tong), their personal trainer (Ali Fedotowsky) and his lawyer (Emily Hsu). So, in addition to being fiscally broke, she’s emotionally ravaged, her outwardly cheerful façade shakily propped up by a combination of antidepressants, alcohol, therapy and, most of all, unbridled denial. One can’t help but wonder how she goes on. 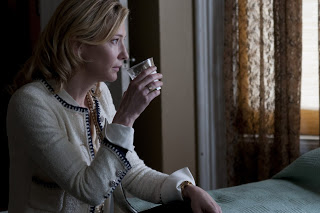 Faced with few options for getting by, Jasmine moves to San Francisco to live with her sister, Ginger (Sally Hawkins). Ginger’s considerably more modest life-style is quite a shock to someone accustomed to the finest things in life being served up on demand, but Jasmine is nevertheless forced to adjust. In conversations between the sisters, it becomes apparent that Jasmine let her circumstances happen to her, having turned a blind eye to all of Hal’s indiscretions, but such behavior has now left her ill-equipped to handle even the most basic challenges and responsibilities of everyday life. Through a series of flashbacks, viewers witness Jasmine’s gradual fall from grace, most notably how she essentially painted herself into her own corner.

Meanwhile, Jasmine seeks to get on with her life. She takes a job as a receptionist in the office of a leering dentist (Michael Stuhlbarg) and attempts to study interior design online. She also seeks to smooth over her sometimes-contentious relationship with Ginger, though past strains – such as the dissolution of Ginger’s marriage to Augie (Andrew Dice Clay) after Hal embezzled the couple’s money – still linger and color the sisters’ current connection. In addition, Jasmine struggles to get along with Ginger’s new beau, Chili (Bobby Cannavale), who sees Jasmine for the irresponsible phony she often is, circumstances that produce considerable tension in the couple’s budding relationship and even prompt Ginger to pursue a fling with a competing admirer, Al (Louis C.K.). 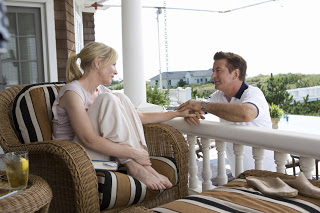 After long being stuck in a rut, Jasmine finally appears to catch a break when she attends a party and meets Dwight (Peter Sarsgaard), a career diplomat seeking to break into politics. The prospect of a romance with this would-be suitor holds much promise for both parties; Dwight would get the ideal politician’s wife, and Jasmine would be able to return to the opulent life-style to which she’s accustomed. The question is, will she take advantage of the opportunity, or will she sabotage herself as she did once before? Ultimately it’s all up to Jasmine – and what she decides to do with her life.

Anyone versed in conscious creation can spot Jasmine’s mistake at the drop of a hat – she’s mired in the practice of creation by default, letting life happen to her without making any effort to take charge of it. She willingly abrogates her responsibility for virtually everything in the belief that Hal will take care of her needs, no matter what. She openly admits to knowing nothing about his dealings or how to handle herself financially, as if she couldn’t be bothered with such trivial matters. She’s also the only one in their circle of friends who’s oblivious to her husband’s unabashed philandering. Such blissful ignorance may make her life “easier” initially, but this attitude comes back to bite her in the posterior in a very big way once all of Hal’s secrets are revealed. 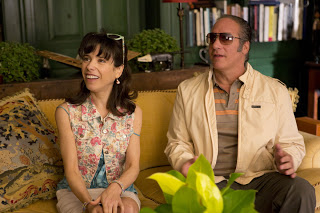 What’s worse is that, despite being a college dropout, Jasmine is by no means stupid; she clearly possesses the intelligence to see what’s going on if only she’ll allow herself to do so. Indeed, on an intuitive level, she truly seems to know better, yet she willfully chooses to look the other way, a choice that makes her eventual decline that much more painful to endure. This failing not only leaves her unprepared for dealing with the specific circumstances that arise in her life, but it also leaves her without the fundamental skill of how to create (or correct) her reality. She’s metaphysically helpless, having to fend for herself without even the most basic ability to figure out how to shape her destiny. And, unfortunately, these conditions set the pattern she’ll face as she attempts to move forward, circumstances that will continue until such time as she chooses to take the necessary steps to wake up and take control of her life.

Unfortunately, this approach to life does little to serve her. Jasmine generally follows the path of least resistance, selecting whichever option seems most convenient and expedient at the moment. This attitude makes it very easy for her to put on airs, to feign knowledge of certain subjects or even to lie if it gets her what she wants – that is, as long as others don’t see through her ruses, something that proves to be a major source of conflict in her dealings with Chili, for instance. And, when the reality of being found out comes home to roost, it may prove to be more than she can handle. Clearly, ignorance isn’t as blissful as it might seem at first glance.

Like “Midnight in Paris” (2011), “Blue Jasmine” is one of writer-director Woody Allen’s better efforts in recent years. It features an awards-worthy performance by Blanchett, who skillfully captures the many sides of a complex character and makes it look effortless. The supporting cast backs up their leading lady well, especially Hawkins, Clay, Baldwin and Cannavale, all of whom turn in fine efforts in their respective roles. The writing, though not as crisp as when Allen was at the peak of his career, is nonetheless generally solid, serving up ample laughs along with a healthy dose of wistful melancholy.

Perhaps my only major complaint with this film has nothing to do with the picture itself but, rather, with the trailer being used to market it. Like many other films in recent years, the trailer is somewhat misleading, portraying the picture as more of a comedy than it really is. To be sure, “Blue Jasmine” has more than its share of laughs, but it also has a more serious side that the trailer fails to bring out. Depression and mental health issues are subjects that are no laughing matter, and, while the film handles them sensitively, its trailer glibly glosses over them. While I realize the purpose of a trailer is to get viewers into theaters, this marketing tactic doesn’t serve potential viewers well when it neglects an integral aspect of the picture, as is very much the case here.

Living life in oblivion is a potentially treacherous prospect, no matter how seemingly benign the practice might initially appear. “Blue Jasmine” makes that point abundantly clear, providing viewers with a cautionary tale about how we view and subsequently create our reality and what happens when we eschew knowledge of that ability. Anyone tempted to look the other way – especially when he or she obviously knows better – would be wise to screen this film to avoid the consequences that come from conscious denial, as well as to discover just what made Jasmine so blue.